When Was Your Vibroplex Made? 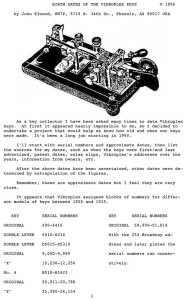 Owners should apply some common sense to the information in John’s document.   As John says, much of the serial number/date table was generated by interpolation.   I believe the dates are accurate to within a year or so. For few years after WW1, Vibroplex advertised the number they had sold, so the dates are very accurate. John has added commas to the serial numbers to make the table easier to read.   Vibroplex did not use commas inside serial numbers.

When the Vibroplex Co. changed hands and was moved to Portland, ME in 1979, the serial number sequence was restarted and became fairly erratic. The company again changed hands and was moved to Mobile, AL in 1995. At that point the serial number sequence was restarted at 100,000. If your Vibroplex has a Portland, ME nameplate, John’s table will help you find when it was made, but John’s table doesn’t include information for Alabama bugs. The company was sold and moved to Knoxville, TN in 2005. Vibroplex products made there unfortunately have no serial number.

Many thanks to John for a truly amazing effort!